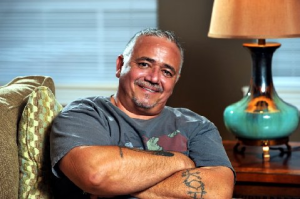 “Dad, when did this first start, Dad?”

My father and I had the same conversation at least once a month for a year before his death.

Frank DeNigris was a Navy man, a cook, retiring in 1977 after 30 years of service. After that, and up until he died, he worked as a cook for the New York City Department of Correction in the Bronx House Of Detention.

My dad was short and stout, had a great sense of humor, and owned the shiniest shoes I have ever seen on any man’s feet.

He met my mother, Maria, in Italy while he was stationed in Naples in 1957. They married in Italy, moved back to the states and had four children. My parents always joked that I was made in Italy, but born in Williamsburg, Brooklyn. I am the oldest of four. After me came, in order, my brothers Anthony and Frank and my sister Rosemarie. My parents divorced in 1981.

My father smoked heavily for most of his life. His health problems startedafter he left the Navy. He quit smoking after his first heart attack, but the damage was already done.

Well, I hung up the phone that day and grabbed my duffle bag and drove to his home. I had work in the morning; I was a New York City police officer in Williamsburg’s 90th Precinct.

When I arrived, we argued – the same argument we always had.

“Why did you wait all weekend before calling me? You know I have to be at work at 6:30 in the morning!”

“I didn’t want to bother you.”

This was the script we followed, word for word, every month.

“All right,” I would say. “Let’s get all your meds and clothes together and go.”

He always wanted me to take him to the Veterans Hospital in Manhattan. I guess he liked it because it reminded him of the service, and he could chat with other vets.

As usual, I checked him in, and while we waited for a room, he flirted with all the nurses. It was around 5 a.m.

“I love you. I’ll be back after work to check on you.”

I left my Dad sitting up on his bed in the emergency room, chatting up one of the nurses.

The hospital would keep him for a few days and send him home. That’s how the script always went.

At least that’s what I thought would happen.