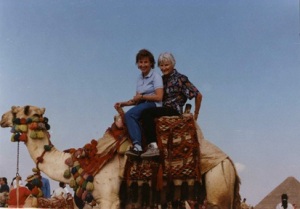 Lin Joyce, a personal historian based in Washington, D.C., is wife to Bill and mom to Annie and Susie and grandmother to Emily, Cameron and Jacob. She is head interviewer for Reel Tributes, a company that produces personal history documentaries that combine personal videos, pictures and music WWW.REELTRIBUTES.COM. Lin is also Mid-Atlantic regional coordinator for the Association of Personal Historians. Three years ago, she founded The Life Stories Program for Capital Caring, a hospice serving the Metropolitan Washington D.C. area, to train hospice patients to preserve family memories. She believes everyone has a story to tell, and loves playing a part in helping to tell those stories.
Dear Annie and Susie,
In 1981, at the age of 79, my grandmother, Frances Louise Meyer Macken, wrote her memoirs (little realizing she would live another 26 years and reach the age of 104. Here are still further excerpts about her life in the San Francisco of the 1920s:
Altogether it was a fun time for a young single woman to be living in San Francisco. We were “flappers” and followed all the styles of the time – daring short dresses, high heels, lots of makeup, short hair, cigarettes and dancing the Charleston. Until the First World War, no nice woman would have dreamed of cutting her hair or smoking and drinking in public. We thought we were sophisticated, but we were really very innocent, at least I was. No one I knew lived with the opposite sex out of marriage, and most young women had high moral standards.
Ruby had to return to Portland and the night before she was to leave, a friend of hers from Portland dropped by to say goodbye. He brought with him an acquaintance from the Army days at Fort Lewis, Washington, in 1918, whom he accidentally encountered on Market Street on the way to our apartment. They hadn’t seen one another since leaving Fort Lewis and it seems like fate that they met that night because the acquaintance was Ray Mackin, whom I married four years later. I decided that night that Ray was a real good and generous person because he immediately invited us to dinner and paid the bill for all four of us!
In 1926 I changed jobs again, going with Standard Oil Company of California at 200 Bush Street. I was in the Land and Lease Division, where we mostly wrote leases for prospective oil-bearing lands. I can recall writing leases for land in Saudi Arabia not realizing that the Saudis would one day control most of the oil production of the world. Standard Oil was a good place to work – the surroundings were pleasant and my fellow workers high class, educated men and women.
Our office was on the eleventh floor and we were able to watch the construction of the new high-rises. In the early twenties there were only a few tall buildings in the financial district, most of the buildings being only one, two or three floors. In the three years I was at 200 Bush, several tall buildings were erected, the most interesting being the Russ Building at Bush and Montgomery. When it was completed, it was the tallest building in San Francisco.
After Rudy returned to Portland, I moved around from guesthouse to guesthouse. These guest houses were all in old S.F. mansions and for $60 a month, I had a private room (shared bath), two meals a day and excellent service. These guest homes were mostly staffed by Filipino men who knew what the word “service” meant. The guests were generally young, single people with an occasional married couple. It was an ideal living situation – we had pleasurable times together and many romances developed.
I dated Ray Mackin on and off for several years. He always took me to good restaurants; the best plays, sporting events such as baseball games, college football, hockey games, etc. He was very good company, being witty and somewhat more affluent than most of the young men I knew. Ray gradually edged out the competition until I was going only with him. Neither of us was in a great hurry to marry but we sort of drifted into it and were married at the Star of the Sea Church on Geary Street, San Francisco, on September 7, 1929.