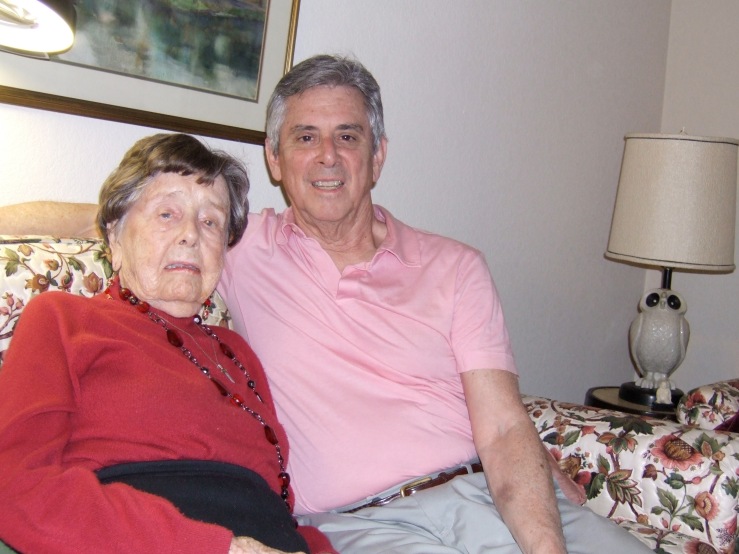 Your grandmother passed away 18 months ago.  Though you only got to see her once a year, I know you were close to her – that, despite her nagging and “friendly advice.” Here’s the eulogy I gave at her funeral; I hope it gives you a sense of her inner strength, resolve and values that you carry forth.

The words etched on the state capitol in Sacramento are “Bring me men to match my mountains.” If you forget the semi-sexist peccadillo, bring me people to match my mountains is a good description of my mother’s journey from small towns in Western Colorado and Wyoming to San Francisco and Redwood City, where she spent three-fourths of her 96 years on this earth.

Of course she wasn’t physically grand like the Sierras or her beloved Rocky Mountains. But nonetheless she was in many, many ways both grand and strong. Grand in her concern and love for her friends and her family, which were her anchors and the center of her life. How she doted over her grandchildren Matthew and Adam and how her voice rekindled when talking to the kids. Grand in her faith and love of her church – St. Peter’s – where she remained active both as a parishioner and as a volunteer for nearly 65 years. And grand in her keen mind.  At 96 she still played bridge every week – and played pretty well…far better than I will ever be able to play.

Her strength was on display in many ways. That she lived in her own well maintained home until well past 90. Of course she would insist I mention how many years ago she was rescued from a burning cruise ship off Alaska, hoisted from the “inferno” by a Coast Guard helicopter. Our very own Kate Winslet. But more important, her strength unfolded as she raised her immediate family – my brother and I, largely alone, instilling in us both values about treating others with respect and wisdom about the world around us.

My mother saw the 20th century unfold and eclipse; and a new century born. She described for me how folks still rode horses when she was young and worried over polio and whooping cough. But in her later years, she marveled over the Worldwide Web, or as she called it, “The Intercom.”

But if we pull back the camera lens, my mom was a example of what Tom Brokaw called, “the greatest generation.”   A generation incubated in the Great Depression, a generation coming of age in the Second World War, then turning to the tough and mundane job of raising kids and raising a nation. And we all have to admit, they did a darn good job of it.